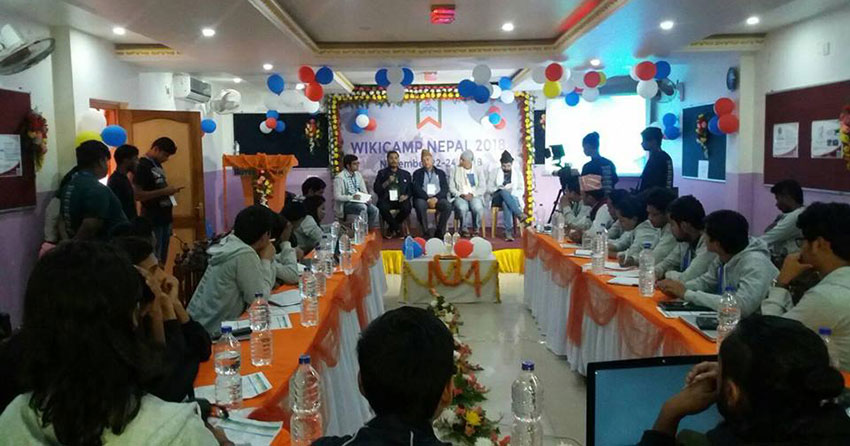 Wikicamp Nepal 2018 started on 22nd November at Lahan of Nepal. One of the organizers Biplab Anand expresses his views in a Panel Discussion that speakers of Maithili language has a huge in number but the local community wiki-user is very low in number. Information for writing article are also very few in number. Words are not available enough in the dictionary, in Maithili language only one or two online dictionaries are available.

Ganesh Poudel, a very experienced user of Nepali Wikipedia, addressed in the panel discussion on the notability of Wikipedia article. For deletion without proposal is very pinching to him. To increase article quality, he prefers the use and discussion on talk page. Citation can be from books, Nepali BBC or from the important sites as Kantipur or Himalayan Times. He also gave emphasis on Disambiguation pages so that the readers.

Nirmal Dulal expressed views on the problem of resources in the panel discussion. He made a view that on line references is not available enough and sometimes those information are not correct. He told to the participants that they need to make interlink to other wikis. Words from other languages can be assimilated to the Nepali according to the pronunciation. He expresses the view that for citation, we should use national dailies and never should we use biased views.

Nirajan Pant advises to make a friendship with language, then you could achieve the command on your own language.

Soroj Kumar Dahkal, the moderator of the panel discussion, presents the view that writing in Wikipedia is boring. When the problem comes on grammar or writing, what should you do. Nepali language has a lot of books, magazines, websites but not so much in Maithili or Detoli. So these are the problems. He also expresses the view to follow the rules of Tatsam and Tatvab words. Janak Bhatta expresses his view to collaborate with other institutions.

Hindi Wikipedian Viresh Discussed on Inspiring Young Contributors for Outreach Activities. He expressed his views that Outreach activities is very important for the new emerging Wikipedias. To include younger Wikipedians, he said that in this way we can reach in various Wikis. To extract ideas from English wikis is easy but when we search in Hindi we get very few articles. So we need enthusiastic editors who will edit a lot.

So he pays a lot of emphasis on various activities to achieve outreach goals. Motif of Viresh is to generate new editors from college and university students or from other professions. To him new younger Wikipedians are like diamonds.

Ganesh Poudel addressed on the Community evolution, organization framework and leadership from the perspective of Nepalese Wikimedia movement evolution process. He presents the historical milestones of Nepali Wikipedia. It starts on 3rd June 2003 and first editathon was done on 2012. He gives emphasis on to increase the participation especially on writing editing and photograph upload. He also gave priorities on increase wikimedia projects.

Mr. Poudel presented to increase the discussion on notability, redirect pages and the rules on speedy deletion, neutrality point of view. He also focused on the characteristics of encyclopedic writing. Wiki-loves monument, Wiki-loves Earth, Outreach activities, Editathons, Wikipedia Education Projects can help to increase the involvement of the users. He also suggests ideas to formulate common set of goals in order to concentrate some efforts to achieve tangible outcome.

He also discusses the motivational factor for the Wikipedia. What are the role of a new user or what are the contribution. Some questions also arises that why would they work. If the know, what they are doing, they will feel interest.

Janak Bhatta, a veteran Wikipedian of Detoli Wikipedia, presented the idea of How to integrate their efforts. He presented some possible integrated efforts may be the improvement for the existing Wikipedia Communities in Nepal and Interaction within Wikimedia communities communication. His idea was to decrease the gender gap and to increase Community best practices.

On the third day, Saroj Kumar Dahkal discuses on the Wikipedia Education program in Nepal. He expresses the view that Wikipedia belongs to Education. Not only Wikipedia but whole set of it’s sister projects can serve in education to solve the issues of digital literacy, information literacy, language learning, collaboration and many more; popularly called 21st Century skills.

He also informed that Wikimedians in Nepal have been running the education program since 2013. But it should not only be a program and activity but should be valuable to academia which is most of the time very stringent and require rigor in their programs. Wikipedia in education is a win-win-win for Academia, society and the Wikimedia community as a whole. We’ll work together on Wikipedia Education program design, target setting, executing a successful Wikipedia education program, he added.